-algebra. All this is classical probability theory but I think not many people (me included) come across this in a standard course in probability. These tools and ideas are quite useful in ergodic theory. An example of this is the proof I present on this post of the ergodic decomposition theorem.

I will start by trying to give some intuition about the notion of conditional expectation with an example. Suppose that you want to know how many people will visit a particular beach on a given day (say you sell ice-cream). This is a random variable

. The first approximation you can make for the expected value for

is the statistical average. However, a better approximation for

(say). Let’s call the random variable that represents the temperature

. The expected number of visitors on a day where the temperature is

can be denoted by

is what is called the conditional expectation of

). Indeed this random variable is the best approximation for

if all you know is the temperature

. It is not hard to see that the expectation of

(the expected number of visitors, regardless of temperature).

be a random variable. The conditional expectation of

such that for all

is the function in

. This sentence is made more precise below on Theorem 6. From an information theory point of view,

is the best guess of the value of

when all the information we have is

. For instance if we have no information at all (so

is the constant function

, and that’s the best guess one can have for

. On the other extreme situation, when we have complete information (i.e. when

and our “guess” for

be a random variable. The conditional expectation

exists and is unique.

Proof: To prove existence we define the complex measure

(if you are not comfortable with complex measures, split

separately). It is easy to check that this is indeed a complex measure. Moreover if

as well. In other words we have

. Therefore we can apply the Radon-Nikodym theorem to find a derivative

we have that for every

is a conditional expectation of

. To prove uniqueness, assume that

are both conditional expectations of

has positive measure then without loss of generality the set

has positive measure. Hence there is some

such that the set

has positive measure. But since both

which is a contradiction. This shows the uniqueness of

We will need the following basic fact about conditional expectations:

be a real-valued random variable. The conditional expectation

takes values in a convex set in a Banach space, then also

takes values on that convex set, but the proof is technically more cumbersome.

Proof: We prove only the first inequality, the second can be easily derived from the first one by considering the random variable

was arbitrary we conclude that almost surely

be the set of points where the inequality (1) fails. Let 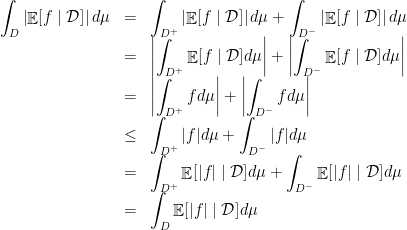 is the set of points where the inequality (1) fails, we conclude that

Proof: We show that actually the norm of the operator is

. In this case we can use the Hilbert space structure to give a different characterization of the conditional expectation.

be the orthogonal projection (observe that

is a closed subspace of

. Then for every let

Proof: By definition of orthogonal projection, for any function

then the indicator function

A good example to keep in mind when talking about disintegration of measures is the following: Let

be the lower triangle on the unit square, let

if and only if

is the union of vertical lines (more precisely, for all point

be the restriction of

be the measure on

with respect to the Lebesgue measure. Then the probability space

is equivalent to the system

is an isomorphism of probability spaces. The meaning of this is quite intuitive:

induces a bijection of the

algebras that matches sets with the same measure.

Moreover, we can recover the measure

is a probability measure on

is the normalized Lebesgue measure on

Note that if we started with the unit square instead of the triangle, then all the measures

be a compact metric space, let

-algebra of Borel sets on

be a probability measure. Let

-algebra. Then for almost every

there exists a probability measure

such that for every

This result applies more generally than to compact metric spaces, but this restriction makes the proof technically easier.

is a compact metric space, the space

of continuous functions from

is separable (with the topology of uniform convergence, equivalently, the supremum norm). Let

be a countable dense set in

. Thus there is a set of full measure

. Note that, by Proposition 3 we have

can be extended to a continuous functional on

. By the Riesz representation theorem there exists a measure

. It follows from Proposition 5 that the function

and since the sequence

we conclude that (3) holds for any

. From Proposition 5 this implies that

for which this series converges and

7 Responses to Disintegration of measures