Two of the most fundamental tools in ergodic Ramsey theory are the mean ergodic theorem and the van der Corput trick. Both have a classical and fairly simple proof, which I have presented before in the blog. Recently I came across alternative proofs for both results which seem to “not use anything” other than very well known general facts (such as Banach-Alaoglu theorem). Although both facts are related to Cesàro limits along Følner sequences in arbitrary amenable groups, the proofs presented in this post are not related. I don’t think either of the proofs is new, but I don’t remember ever seing them written out; so I decided to post them here.

After writing down the alternative proof of the van der Corput trick, I realized one actually needs somewhat advanced results to obtain the full generality… (However if we care only about

, or even abelian groups (or the weak version with only one average), then the proof is softer.)

I wrote a post about both the mean and the pointwise ergodic theorem before in this blog and there I presented the usual textbook proof. The typical proof uses the fact that the “ergodic” subspace (the orthogonal complement to the space of invariant functions) is generated by vectors of the form

. The proof below is even softer and proceeds in two stages: first we establish weak convergence — this portion is valid for any amenable group — and then we use a trick (which goes back at least to Furstenberg) to deduce strong convergence. Unfortunately this second step does not seem to go through in non commutative groups (the theorem is still true, just this proof doesn’t work).

be an amenable group and let

be a unitary representation of

is the orthogonal projection onto the space of vectors in

is a closed subspace of

be arbitrary and decompose it as

. Since (1) depends linearly on

, and is trivially true when

, it remains to show that it holds for

, in which case the right hand side is

. By the Banach-Alaoglu theorem there exists a subsequence of

, in the weak topology. For any

, using the Følner property we have

It follows from the Riesz representation theorem that

is invariant we have that each

. We showed that every weakly convergent subsequence of

which finishes the proof.

We can now use Theorem 1 for the group

to deduce the strong convergence, at least when

be an abelian group and let

be a unitary representation of

is the orthogonal projection onto the space of vectors in

Proof: As in the proof of the weak ergodic theorem, the result is trivially true when

, so it suffices to prove it for

is a Følner sequence in

interval. Bergelson observed that the same mechanism could be extended to sequences in Hilbert spaces and that it could be used as the engine behind several recurrence and convergence results.

be a countable amenable group and let

be a bounded map into a Hilbert space

. Assume that for every

Assume for the sake of a contradiction that the theorem is false. After passing to a subsequence if needed we can assume that

exists and is not

Passing to a further subsequence we can assume that all the (countably many) limits exist. Using the Følner property we can rewrite

be a finite set with cardinality 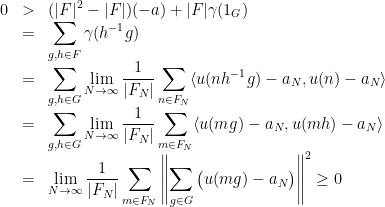 which is the desired contradiction.

The same proof essentially gives the strong version, but there is a technical step which, though it seems rather natural, requires the Naimark’s dilation theorem to prove. This technical step is spelled out in the next lemma.

be a group and

a function. We say that

is positive definite if for every

vanishes outside a finite set) we have

be an amenable group, let

be a positive definite function. If

is positive definite, it follows from Naimark’s dilation theorem (Theorem 5.20 in these notes of V. Paulsen) that there exists a unitary representation

. Applying the weak ergodic theorem (Theorem 1 above) one deduces that

We can now prove the strong version of the van der Corput trick:

be a countable amenable group and let

be a bounded map into a Hilbert space

Proof: Assume for the sake of a contradiction that the theorem is false. Let

be as in the proof of Theorem 3. Using the Følner property we can rewrite

On the other hand, it follows directly from (3) that

be a function with finite support. Then

Lemma 5 now implies that the limit

in (5) is non-negative, contradicting the fact assumption that

. This contradiction finishes the proof.

This entry was posted in Number Theory. Bookmark the permalink.