A measure preserving system is a quadruple

is a probability measure and

is a measurable map satisfying

The notion of isomorphism in the category of measure preserving systems (defined, for instance, in this earlier post) is fairly flexible, as it allows

measure perturbations. For instance, the system

is the Lebesgue measure and

is isomorphic to the Bernoulli system

is the left shift and

is the infinite product of the measure

However, this flexibility can make it quite difficult to decide whether two given systems are isomorphic or not. While several spectral invariants can be used, such as ergodicity, weakly mixing or strongly mixing, they are not sufficient to distinguish even between two Bernoulli shifts. To address this problem, Kolmogorov and Sinai developed the notion of entropy in the late 1950’s. Since then, the entropy of measure preserving systems, together with its sister in topological dynamics, has became a fundamental tool in understanding the structure of dynamical systems, with applications far beyond distinguishing non-isomorphic systems.

In this post I will define and then briefly survey some of the basic properties of entropy. I’ll mostly follow the exposition in the upcoming book of Einsiedler, Lindenstrauss and Ward, whose draft is available here; other good sources are Walter’s book and, in a somewhat different perspective, Austin’s recent notes.

The definition of entropy can be a bit intimidating the first time one sees it. In later sections I try to present some ways to understand the notion of entropy, but I decided it would be useful to start with its raw definition.

-algebras, and the following proposition says that there is really no difference.

. Moreover, the finite partition is unique.

Proof: If there exists such a partition then

is finite. Conversely, if

be the collection of all non-empty sets

such that any proper subset of

form a partition of

can be easily shown to equal

consists of all unions of elements of

is another partition generating

, the intersection is a subset of

is either equal to

or empty; and also it’s equal to

or empty. But it can not be empty for every

forms a partition, so we conclude that

-algebra generated by their union

. More generally, given a collection

-algebras, we denote by

is the generating partition for

is the generating partition for

, then the generating partition for

consists of all non-empty sets of the form

be a measure preserving system. For each

-algebra consisting of all sets

. We are now ready to define the entropy of a measure preserving system.

be a measure preserving system, let

be its generating partition.

is usually defined with a limit instead of an infimum. Indeed the sequence

can be shown to be subadditive and hence the fact that

(and in particular that the limit exists) follows from Fekete’s lemma (we will return to this point after Lemma 7 below).

The word “entropy” has been used in thermodynamics since the 1800’s, and was adapted by Shannon as a substitute for “information”. According to Shannon, the idea to use the word entropy came from von Neumman:

I thought of calling it “information”, but the word was overly used, so I decided to call it “uncertainty”. […] Von Neumann told me, “You should call it entropy, for two reasons. In the first place your uncertainty function has been used in statistical mechanics under that name, so it already has a name. In the second place, and more important, nobody knows what entropy really is, so in a debate you will always have the advantage.”

I will now try to briefly explain why the quantity defined in Definition 3 can be seen as quantifying “information”. Consider the following scenario: Alice chooses a point

and Bob has to guess

yes or no questions (which Alice answers truthfully). It’s not hard to see that Bob can always determine the value of

if and only if

logarithm) by asking questions of the form “Is

. Therefore we say that determining the exact value of

“bits” of information, and that determining whether

is in a set

requires one bit of information. If

bits of information. More generally, if

Next suppose that we are given a function

randomly with the uniform distribution and tells Bob the value of

. How much information is Alice giving to Bob? Let’s say

we are learning which of the sets

, and so the amount of information is

is now being chosen randomly, the average information is

is the uniform probability measure on

be a random variable which only takes finitely many values. Let

-algebra such that the function

is measurable. Then the quantity

for a randomly chosen point

Suppose now that again we have a probability space

. If we already know the value of

is randomly chosen according to

, how much new information (or entropy) will we learn from knowing also the value of

? A reasonable answer is that it should be the entropy of the random variable

(which takes values in

) representing all the information obtained from knowing

, minus the entropy of

are independent, then knowing

should in no way influence how much information is contained in

. At the other end of the spectrum, if

is a function of

and so there is no new information. Indeed if

are independent, then the entropy of

is precisely the sum of the entropies of

the the entropy of

is the same as the entropy of

While random variables might seem an intuitive way to talk about information, it is actually easier (and somewhat less misleading) to think in terms of the

. We define the conditional entropy of

to be the quantity

This definition is usually presented as a theorem, the usual definition being as follows: let

be the generating partition for

be the probability measure on

A straightforward computation shows that the two definitions agree, the advantage of the definition given in Definition 4 is that it does not make explicit use of the partition which generates

. On the other hand, the alternative definition given by (1) implies in particular that

The following proposition confirms the natural heuristics from the beginning of this subsection.

with equality occurring if and only if

are independent (meaning that

Notice that from Definition 4 if follows directly that(3) and (4) are equivalent.

be the generating partitions for

respectively. Notice that the nonempty sets of the form

form the generating partition for

is convex. In the following computation we use Jensen’s inequality in this form and the identity

The following corollary confirms two other properties that one would expect from thinking of entropy as information. The first of these, (5), states roughly speaking that the more we already know, the less we learn from

. The second, (6), says essentially that regardless of what we already know, the amount of information contained in

is at most the sum of the information of

(which is the conditional version of (3)).

Proof: From Definition 4 we have

be the positive measure atoms of

be the conditional measure on

Proof: The first equality follows directly from the Definition 3 and the fact that

preserves the measure. The second equality follows from the first and Definition 4.

-algebra. Lemma 7 implies that each of the (finite)

have the same entropy. Therefore, if all those

-algebras are independent, it follows from Proposition 5 that the entropy of

. Often it is the case that they are not independent, in which case the entropy of

, again by Proposition 5. In any case,

showing that the function

is subadditive and hence, in view of Fekete’s lemma, the infimum in the definition of

is also the limit of

represents the average information needed to know in which atom of

each of the points

are. On the other hand, using Definition 4, we can write

, knowing which atom contains each of the points

are now both being randomly chosen).

In a different direction, instead of decomposing

as a telescoping sum as in (7) (essentially conditioning on the past), we can also use Definition 4 to write

Then, using Lemma 7 and re-indexing we deduce that

From Corollary 6 the (non-negative) quantity

increases and so it converges. Therefore

knowing which atom contains each of the future iterates

. More succinctly (but somewhat less accurately), one could say that entropy is the amount of information needed to recover the present from the future.

In the previous two sections we defined the entropy of measure preserving systems and interpreted it in terms of information, but we are still unable to compute the entropy of even simple systems, mainly because the entropy

is defined as the supremum of

-algebras. The Kolmogorov-Sinai theorem addresses precisely this difficulty, at least in the case when a finite generator exists (which is often the case).

be a one-sided generator i.e., a finite

Moreover, if the system is invertible and

is a two-sided generator, i.e. it satisfies

In order to prove Theorem 8 it will be convenient to first establish a few lemmas. 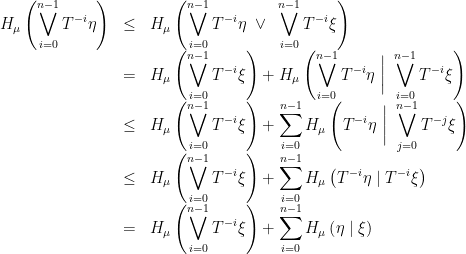 and taking the limit as

we obtain the desired conclusion.

-algebra. Then for every

Proof: Using (2) and Definition 3, it follows that

. To prove the converse inequality we use the fact that 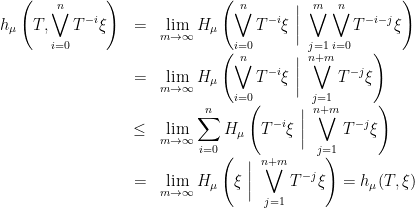 We are now ready to prove Theorem 8.

Proof of Theorem 8: Assume that

is a one-sided generator (the two-sided case can be proved analogously). Let

-algebra; we need to show that

. In view of Lemma 10 this is equivalent to show that

. Using Lemma 9 it thus suffices to show that

Observe that the family

, and hence it equals

be the generating partition for

be the set that minimizes

measure if needed we can assume that the collection

forms a partition of

-algebra generated by that partition. From (5) it follows that

A quick computation shows that

Proof: Using Theorem 8, then (8), then Lemma 7 and finally the fact

We are finally ready to start computing the entropy of some concrete systems.

be the Lebesgue measure and let

is rational, then for some

is the identity and hence for any finite

is irrational, then the

generated by the sets

(for it contains arbitrarily small intervals around every point). Since the system is invertible, Corollary 11 implies that

be a finite set, endowed with the discrete topology and a Borel probability measure given by the weight

, endowed with the product topology, let

be the product measure (denoted perhaps by

be the shift map.

Then the entropy of

Proof: We will use the finite

generated by the family

. This is a (two sided) generator and hence

It is clear that

Pretty much the same proof can be used for one sided Bernoulli shifts, although now the generator is one-sided.

be a finite set, endowed with the discrete topology and a Borel probability measure given by the weight

, endowed with the product topology, let

be the product measure and let

be the shift map.

Then the entropy of

Notice that the Bernoulli systems defined in Example 2 are invertible and the ones defined in Example 3 have a one-sided generator. Nevertheless they both have positive entropy. This shows that both hypothesis in Corollary 11 are necessary to obtain

be a measure preserving system where, as before,

, for some finite alphabet

-algebra (for the product topology) and

is the shift map.

For each finite set

From the Kolmogorov extension theorem, the measure is defined by the values of

for every cylinder set, and so it is not surprising that we can find the entropy of the system as a function of the values

generated by the cylinder sets

is a one-sided generator, and hence

. Observe that for every

, the generating partition for

is the collection of all cylinder sets of the form

This entry was posted in Classic results, Ergodic Theory, Tool and tagged Entropy. Bookmark the permalink.