A viewpoint on Katai’s orthogonality criterion

The Liouville function, defined as the completely multiplicative function

which sends every prime

, encodes several important properties of the primes. For instance, the statement that

is equivalent to the prime number theorem, while the improved (and essentially best possible) rate of convergence

is equivalent to the Riemann hypothesis.

Of particular interest are statements involving correlations (or lack thereof) between

and certain “structured” functions. In this direction, Green and Tao established “orthogonality” of

with any nilsequence. More precisely, they showed that for any nilpotent Lie group

is compact, any Lipschitz function

which was an important ingredient in their proof of the “finite complexity” version of the Dickson/Hardy-Littlewood prime tuple conjecture. Perhaps inspired by this result, Sarnak then conjectured that in fact the Liouville function (actually, the closely related Möbius function) is orthogonal to every deterministic sequence:

be a compact metric space and let

be a homeomorphism. If the topological dynamical system

topological entropy, then for every continuous

Sarnak’s conjecture is still open, despite some remarkable progress (see the recent survey of Ferenczi, Kułaga-Przymus and Lemańczyk for information on the progress made so far).

A useful tool to establish partial cases of Sarnak’s conjecture (and other results not implied by the Sarnak conjecture) is the following orthogonality criterion of Katai.

be bounded and let

be a completely multiplicative function. If for every distinct primes

Remark 1 One can in fact relax the condition on

to be only a multiplicative function. This allows the criterion to be applied, for instance, with

being the Möbius function.

The statement of Theorem 2 is reminiscent of the van der Corput trick, which is a ubiquitous tool in the fields of uniform distribution and ergodic Ramsey theory, was the protagonist of a survey Vitaly Bergelson and I wrote and has been mentioned repeatedly in this blog. In fact one can prove both results (Katai’s orthogonality criterion and van der Corput’s trick) using the same simple functional analytic principle. In this post I present this principle and use it to motivate proofs for the two theorems.

, Pythagoras’ theorem implies that their sum

is another vector whose correlation

, then by the Cauchy-Schwarz inequality,

we obtain the following corollary of Bessel’s inequality:

be pairwise orthogonal unit vectors in a Hilbert space

does not depend on

be the common value

and hence by the Pythagoras theorem and the Cauchy-Schwarz inequality,

It is possible to extend the above proposition to a setting where one does not have a genuine Hilbert space. Given a sequence

of complex numbers, define its Besicovitch seminorm by

denote the space of all sequences

. The Minkowski inequality implies that

is a vector space. We can (partially) define an inner product in

whenever the limit exists. It is clear that if

exists, then it must equal

. Moreover, it is easy to check that both the Pythagoras theorem and the Cauchy-Schwarz inequality hold in this space, assuming that all the inner products are well defined. Therefore, the proof of Proposition 3 holds for vectors in

(and in particular it exists) and

(exists and) does not depend on

Remark 2 There was nothing special about the sequence of intervals

Next let’s introduce the isometry

. It follows easily from the definitions that

in Lemma 4 we deduce that

This is essentially the van der Corput trick, the only difference being that we do not need to assume that

exists. In other words, from Lemma 4 we quickly obtain the following version of the van der Corput trick:

and suppose that for every

One can prove this by passing to a subsequence

with respect to this averaging scheme as in Remark 2 and apply Lemma 4. Instead we adapt the proof of Lemma 4 to establish the following stronger version directly.

and suppose that for every

where, as usual, we denote by

we introduce the notation

be a function which tends to

but grows sufficiently slow, so that

In other words, at scale

, and hence to each other. Since

, we will want to rotate each shift of

accordingly. To this effect, let

be the sum of the first

. Using the orthogonality of the

where the constant implicit in the

notation does not depend on

. Finally, the Cauchy-Schwarz inequality implies that

term is independent of

, taking the supremum over all

, and then the limit as

Remark 3 There are several versions of the van der Corput trick strictly stronger than Proposition 5, allowing each

to be a vector in a Hilbert space, and weakening the condition (3) to hold not for every

but only on average. One could adapt the proof presented to obtain analogous strengthenings of Proposition 6.

The orthogonality criterion of Katai can be seen as another application of Lemma 4, as follows. Let’s first pretend that the inner product in

given by (2) is invariant under dilation by a prime, in the sense that

be a completely multiplicative function we would have

. In this language, the assumption (1) in Theorem 2 states that

, so that now Lemma 4 implies that

Of course it is not true that the inner product in (2) is invariant under dilation, since the sequence of intervals

is an additive Følner sequence but not a multiplicative one. Nevertheless, we can make this strategy work by using the fact that the inner product is invariant under dilation on average in a strong sense made precise by the Turán-Kubilius lemma:

be a finite set of primes and let

, where the normalization factor

is the sum of the reciprocals of the primes in

While this lemma is quite powerful and can look a bit surprising at first, it is just an application of the following simple fact in probability.

be independent events in

(not all empty), let

Proof: Using the fact that

. Integrating the previous equation over

Proof of Lemma 7: Apply Proposition 8 with

being the normalized counting measure on

is divisible by all the primes in

, observing that the Chinese remainder theorem implies that the events

Lemma 7 will be useful to us when combined with the following straightforward computation.

be a completely multiplicative function and let

be a prime. Then 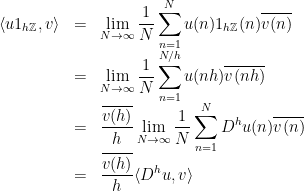 We can now apply the method outlined in the first paragraph of this section to prove the Katai orthogonality criterion.

of primes and let

be the sum of their reciprocals. Using Lemma 7 and the Cauchy-Schwarz inequality we have

Using Lemma 9 and again the Cauchy-Schwarz inequality, we then get

Finally, using the hypothesis (1) we have

which implies, after sending

Remark 4 One could adapt the proof presented to deal with multiplicative functions (as opposed to completely multiplicative). I chose not to do so to keep the main idea more clear, one can find a good presentation of the full proof in Tao’s blog post on the subject.

The proof of Theorem 2 was presented in a soft form, with no mention of the parameter

. By being somewhat more careful with the proof one could hope to extract some quantitative decay in the correlation between

, in terms of the decay assumed in (1). For instance, letting

then, under the conditions of Theorem 2, for every

and every finite set

of primes all smaller than

, the proof gives the inequality

Unfortunately, this is not very useful, because even assuming

all the time, the term

contains primes which are larger than

, which would render the Turán-Kubilius lemma useless (as seen by the fact that the second term explodes in this scenario).